YOUNGSTOWN, Ohio, April 8, 2022 — In an effort to support its community, Hynes Industries partnered with the United Way and donated more than $9,000 at the end of 2021 to support a number of programs. 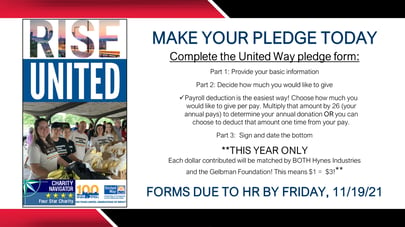 As a part of a United Way Workplace Campaign, Hynes encouraged its employees to pledge during its open enrollment period at the end of 2021. Both Hynes and Columbus, Ohio-based Frank & Pearl E. Gelbman Charitable Foundation promised to match employee donations.

Hynes also had a United Way representative speak at its three locations to share details about the nonprofit, as well as which programs their contributions would support. Employees had the opportunity to donate to a United Way branch of their choice.

“We care deeply about the community we live and work in, and this was the perfect opportunity to give back,” said Hynes Industries President and CEO Rick Organ. “We know it can be a lot to ask for a pledge, and we were truly blown away by the outpouring of support from our employees. It’s a testament to the generosity of the Hynes community, and we are excited to continue this partnership.”

Learn more about the United Way and how you can support your community here.

Hynes’ involvement with the United Way also led to it receiving the Top New Workplace Campaign award at the United Way of Youngstown and the Mahoning Valley event this year.