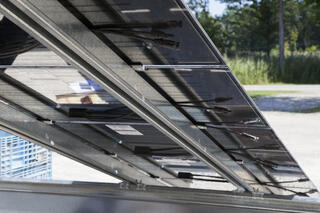 The global steel market is currently producing more than 2,300 million metric tons (MT), yet, global demand is only at 1,500 MT. Furthermore, an additional 352 MT capacity is planned for this year. That’s a lot of excess, and it’s affecting U.S. companies, workers and the global steel market. So what’s going on?

The Cause of Global Steel Overcapacity

In 2000, China reacted to a growing economy and high demand for steel by increasing domestic steel production, subsidized by the government. However, the country has now reached self-sufficiency, according to a 2016 report by Duke University’s Center on Globalization, Governance & Competitiveness.

Chinese crude steel manufacturers contributed 46 percent of the global steel overcapacity in 2015, with the U.S. falling at just 5 percent, below the European Union and the Former Soviet Union, and just above Japan. The remainder of overcapacity contribution is attributed to the rest of the world combined.

In China today, the average return on investment for iron and steel companies is lower than 3 percent. Fueled by a large domestic demand from 2000 to 2008, the Chinese model may be stuck in the past.

Where does this leave the U.S.? With a global overcapacity of steel and a climate that encourages cheap imports from government-subsidized countries, rather than investing here at home. Let’s take a look at the major impacts this overcapacity has on the global and national economy.

High overcapacity limits capacity utilization, which decreases manufacturers’ profitability significantly. Facilities need to be using around 80 percent of capacity to remain profitable, yet the industry hit a ten-year low in 2015 at 68.7 percent.

In addition to limited capacity utilization, world steel prices have continued to decline since 2011, according to the Organisation for Economic Co-operation and Development, and, as a result, the industry is dealing with decreased profitability. In fact, the steel sector is believed to be underperforming most other manufacturing industries.

Due to increased imports and decreased exports, the U.S. lost more than 57,000 manufacturing jobs between January and August 2016, according to the Bureau of Labor Statistics. In fact, the world’s largest steel manufacturer, ArcelorMittal, resorted to reducing its debt in 2016 with $3.3 billion capital raise following a record loss.

Trade isn’t the only cause of job loss in the U.S., to be clear. It made up about 13 percent of job loss from 2000 to 2010, according to a 2015 Ball State Study University study. The remaining 87 percent came from factory efficiency, which primarily stemmed from automation and technology. However, from 1999 through 2011 imports from China cost the U.S. about 2.4 million jobs, according to a paper co-authored by MIT economist David Autor, David Dorn of the University of Zurich in Switzerland, and Gordon Hanson of the University of California at San Diego. That’s a significant number of jobs.

Good News for the Steel Industry

After nearly two years of decline in U.S. steel manufacturing, crude output is expected to rise about 4 percent in 2017. This expected growth can be attributed to several factors:

Forecasts predict a positive turn for the global and U.S. steel markets in 2017. Do you want to contribute to this global and domestic growth? Invest in local, American-made steel. Contact Hynes Industries, proud American steel fabricator since 1925.